Wolf in the Alps

The ultimate goal of the WOLFALPS project is to implement and coordinate wolf conservation actions in key core areas and beyond in the Alps ecosystem, from West to East, to further support the natural wolf alpine recolonization process. The lack of any form of coordinated management adopted at the Italian alpine scale is one of the most crucial challenges.

Therefore, the implementation of the overall organization of the WOLFALPS project, which is build up on a shared and coordinated conservation program implemented within the different administrative divisions in Italy and Slovenia, and shared with other alpine countries, is the first objective to support wolf conservation over the Alps.

At the same time, to be highly efficient and realistic, conservation measures will be firstly applied in key core areas distributed from West to East over the Alps. A spatial model, developed in a previous ECONNECT project, indicated the wolf core areas important for the long term persistence of the wolf population within the alpine ecosystem.

We adopted these indicated core areas, which are either already occupied by wolf packs, as in the Western Alps, or just recently recolonized by few individuals in the Central-Eastern Alps. Hunters participated in assessing the wolf population conservation status at the beginning of the project and the end of the project. They were one of the main target groups for dissemination and for study of public attitudes toward wolves. 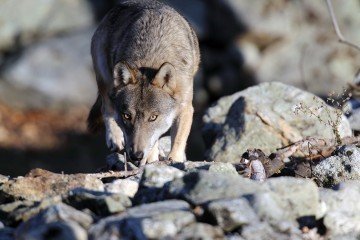