Control of American Mink, Raccoon Dog and Raccoon in Denmark

The Danish Hunters Association (DHA) is the umbrella association for 861 local hunting clubs and has around 90.000 members.

The main communication channel from the association to hunters their member’s magazine which is published 11 times a year. Additional communication is done through their official website, email newsletters and social media.

In a close cooperation with the Danish Environmental Protection Agency (EPA), the Danish Hunters Association has focused on the dissemination of information and the education of hunters fin order to have an effective regulation and control of Invasive Alien Species (IAS). These communication efforts does  not only focus on best practice examples but also on the most ethical practices. 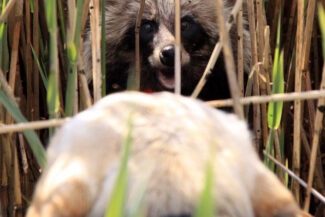 Among the various invasive species that have received particular attention from hunters is the the Raccoon Dog, which has seen the greatest population growth in recent years.

When control actions were initiated 10 years ago, the knowledge of Danish hunters about the invasive Raccoon Dog and the options to effectively control the species  were limited and had several obstacles along the way to success.

A crucial step has been changing the relevant legislation in place. Moreover, hunters had to learn how to use necessary, novel and appropriate hunting methods and equipment which had not been allowed for hunting in Denmark before.

The collection of information about the presence of various invasive alien species and how to practically manage them is still ongoing.

The experience from Denmark has shown that Raccoon Dogs give birth to up  to eleven puppies per litter, which is unusual when compared to on the experience gained in other countries. This shows how crucial targeted and effective control measures are if hunters want to limit the species’ negative impact on  native biodiversity.

In addition to informing and training Danish hunters, DHA coordinates the monitoring and controlling of raccoons along the German border,  as well as providing citizen reports and  handling inquiries regarding invasive predators. DHA is also lending  useful equipment and is analysing  incoming pictures with potential sightings of IAS.

IAS theme days and courses on regulations and the control of invasive species are supported by the Danish Environmental Protection Agency (EPA) and are offered free of charge to both members of the Danish Hunters Association as well as the general pubic. In addition to these IAS theme days and courses on IAS regulations and control, the dissemination of information takes place via articles, printed leaflets, films, and newsletters targeting hunters working with IAS regulations and control.

Differing attitudes towards  invasive species are expressed when it comes to the Egyptian goose. Danish ornithologists seem to welcome them, while the Danish Hunters Association tries to spread the knowledge of this species with a view to the extermination according to the FACE Code of Conduct on Hunting and Invasive Alien Species.

As it proved impossible to eradicate Raccoon Dog in Denmark completely, the political attitude to possible measurements to control it has changed. This has  led to an all year round open hunting season. However,  ethical  considerations for  the animals during their breeding season have to be applied. It is therefore important to comply with the legislation requirements for killing any young if a parent animal is killed. This has led to an increased focus on regulating adult animals before the breeding season.

As the management of invasive species receives very little funding from the Danish government, all measures are carried out by the voluntary efforts of  hunters. Other environmental organisations have  refused to participate in the effort. Locally, however, there are some examples of cooperation with the hunters.

When Raccoon Dogs proved to be widespread in Jutland, there was a crucial need for a comprehensive effort and  the involvement of as many hunters as possible. In the last two years, despite Covid19, the Danish Hunters Association continued to conduct organised courses (80 in total) and IAS theme days with a focus on species knowledge, current legislation and  hunting methods.  The communication is focused on the Racoon Dog but also the Racoon and the American mink were included, as well as the Egyptian Goose, Muskrat and Coypu.

Educating hunters and a comprehensive dissemination of information have resulted in a rapidly increasing harvest of Raccoon Dogs. This now has led to declining population  in the municipalities where the effort to control this species has been prioritised for many years.

Danish hunters also actively participate in the collection of samples of animals for ongoing studies of  raccoon dog’s food composition, self-harming in connection with using traps and the presence of parasites in raccoons including raccoon roundworm (Baylisascaris procyonis), amongst other studies.

A significant number of hunters have furthermore made the hunt on the Raccoon Dog their primary focus. These experts share their knowledge and experience with other local hunters and disseminate targeted information in certain Facebook groups.

In conclusion, the project has led to new legislation and knowhow that makes it possible for hunters to be  efficient and effective in controlling the species. When it comes to other invasive species , the established communication network and the general interest in Invasive Species by hunters can be considered beneficial. This is necessary to maintain the motivation levels to manage IAS high.Over a 5-year period hunters’ annual harvest of Raccoon Dogs has thus increased from 300 to 11.000 individuals per year.

In Denmark, it is not possible to renew your  hunting license annually, unless you report your game harvest to the Danish Environmental Protection Agency (EPA).

Without the voluntary effort made by hunters, no Raccoon Dogs or other invasive mammals and birds would be regulated in Denmark.